Now that the Nike Metcon 6 is out – the Metcon 5 is getting hard to find – but Rogue Fitness still has the Metcon 5 for sale. We love the Nike Metcon 5. This is the shoe that does it all. Great for lifting weights, sprinting, box jumps, or climbing rope – and everything else in the CrossFit WOD. The other thing we really love about it – it’s the best looking CrossFit shoe for the year 2020. Nike’s sense of style is unmistakable. They know how to make a good looking shoe. And they capitalize on this by releasing various colorways (color combinations) after a shoe launches. Let’s take a close look at their latest – Pale Ivory/Seaweed/Light British Tan/Black. (Please note, some are calling the brown color “Gum” – it’s not – it’s darker and it is officially Light British Tan.) This may be the best looking Nike Metcon 5 colorway yet – Pale Ivory/Seaweed/Light British Tan/Black We’ll take a look – but we will also tell you about all the cool performance features too – because [Read more …]

21cm – that’s a lot. And that is how much the female breast can potentially move during exercise. And here’s an even more shocking fact – did you know that wearing the wrong sports bra during exercise can cause permanent damage? Under Armour is tackling these issues head on by changing the sports bra game with a new innovation. The new Infinity Bra from UA will address both of those issues and function to support women’s unique bodies and needs. How did Under Armour develop this phenomenal new piece of workout gear? They combined the insights from their and applied science and testing team with those from a breast health expert to evolve the sports bra. Breast health expert Dr. Joanna Scurr from the University of Portsmouth helped with the design and test. The UA Infinity Bra is destined to be a perfectly fitting bra – designed for women’s bodies. It’s a new approach, done in a new way. Historically, sports bras are created by utilizing two perfect breast shaped cups from a flat piece of padding. Instead, The UA [Read more …]

Now that the Nike Metcon 6 is out – the Metcon 5 is getting hard to find – but Rogue Fitness still has the Metcon 5 for sale. Are the current Nike Metcon 5 styles (Nike calls them “colorways”) too tame for you? Then feast your eyes on the Nike Metcon 5 AMP in Black / Fire Pink / Green / Strike Blue Fury. The Nike Metcon 5 AMP is a colorful addition to the Nike Metcon 5 line of shoes. These shoes are popular for expanding the boundaries of the modern cross-training shoe performance. Thanks to the ultra stable heel and outsole they offer increased stability for weightlifters , but still have greater flexibility in the forefoot for runners. CrossFit shoes also need to be tough. The Nike Metcon 5 uses durable, haptic 3D print on the mesh upper that will offer superior durability- especially in the high-wear areas. This is because the print is applied more densely in the areas that get the most wear – like on the edges of the toebox, for example. And hey – [Read more …]

INOV-8 has launched a new CrossFit training shoe in their F-Lite line. The INOV-8 F-LITE G 300 is available now. If you are accustomed to running shoes, you may find the features of a good cross trainer a bit baffling. But, we’ll explain the key differences here. Let’s take a look at some of the features. This shoe has a 6 millimeter heel to toe drop. That’s an indicator of the amount of heel raise that the shoe has. It’s not unusual for a running shoe to have a 10 mm heel to toe drop. But for the CrossFit WOD we need something more versatile. This shoe has LESS drop than a typical running shoe, and a LOT LESS drop than a “lifter” – which is what we call Oly lifting shoes. Heel raise is good for some things – but a hindrance for others. Since we’ll be lifting, jumping, running, jumping rope, etc. we need a moderate drop for best results. Some of these moves – like the Olympic lifts – are very explosive movements. The snatch and clean [Read more …] 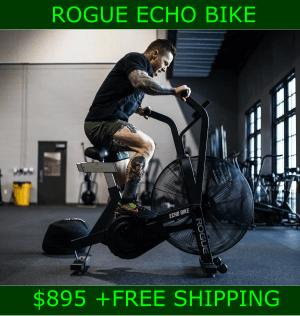